Due to heavily impacted roads in the southern part of the county, our mobile unit

The Health Unit is open for most of your public health needs. Our WIC team

The Health Unit will open late this morning, at 9:00, due to yesterday's winter weather.

Mistakes happen and we're here to help. If mix up your medication, call the Poison

The Webster County Health Unit was first established in 1957 by a vote of the people. It was funded with a .07¢ mill tax. 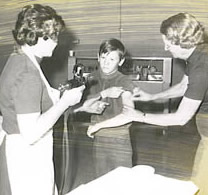 Today the Webster County Health Unit continues its commitment to preserve  protect and promote public health in our community.

Current board members include:

Notes from the first meeting held on September 27, 1957 read as follows:

At the first meeting of the Trustees of Webster County Health Center, the following, appointed by the County Court were present.

Election of officials resulted in the following:

Motion made and carried that the levey be set at .01¢ on each hundred dollars of assessed valuation of property in the County.